I think Trump's simply the culmination of decades of conservative propaganda and brain washing.

I just noticed a post by Mark Hertsgaard at The Nation related to my contention:
Progressives Need to Build Their Own Media
"Trump would not be president today were it not for the help of Fox, Breitbart, Limbaugh, & Co."

The far right are fawning over their Donald sighing collectively, "I'm lovin' it." 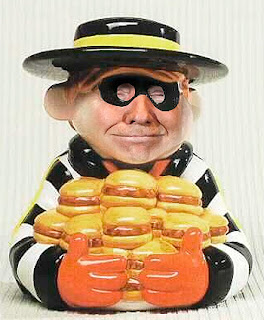 But I know some on the not so far right are unhappy. Really, I personally know conservatives who are upset that a buffoon like Trump is our president. But I don't get it. How can you love Reagan and hate Trump? How different are they?

The Ronald cut taxes on the rich, fought for deregulation of banks and industry, and escalated military spending…tripling the deficit. The Donald sounds a lot like Reagan to me. Trump was spewing the same BS at CPAC a few days ago, advocating the same disastrous policies. You know CPAC, the annual heart-sickening conservative freak show.

I remember freaking out when Reagan made that monster James Watt U.S. Secretary of the Interior. 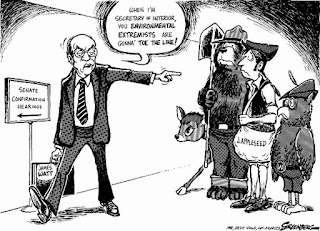 Here's a good joke:
James Watt’s infamous quip about “a woman, two Jews, and a cripple”
(This Day In Quotes.com)

The only price we have to pay for conservative leadership is death and destruction to people and the environment, and decades of economic ruin. And of course the blow back from our decades long killing spree and economic exploitation of global resources for the benefit of the super wealthy. All perpetrated with help and support from the DNC.
Posted by Talking Bag at 7:32 AM