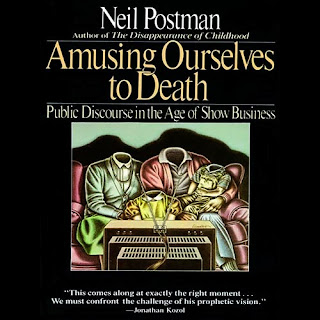 "Television has conditioned us to tolerate visually entertaining material measured out in spoonfuls of time, to the detriment of rational public discourse and reasoned public affairs. In this eloquent, persuasive book, Neil Postman alerts us to the real and present dangers of this state of affairs, and offers compelling suggestions as to how to withstand the media onslaught. Before we hand over politics, education, religion, and journalism to the show business demands of the television age, we must recognize the ways in which the media shape our lives and the ways we can, in turn, shape them to serve out highest goals...
- Goodreads.com"
Posted by Talking Bag at 9:20 AM