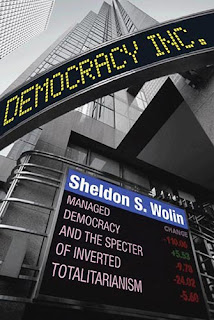 Democracy incorporated : managed democracy and the specter of inverted totalitarianism
(Semantic Scholar.org)
"Democracy is struggling in America--by now this statement is almost cliche. But what if the country is no longer a democracy at all? In Democracy Incorporated, Sheldon Wolin considers the unthinkable: has America unwittingly morphed into a new and strange kind of political hybrid, one where economic and state powers are conjoined and virtually unbridled? Can the nation check its descent into what the author terms "inverted totalitarianism"? Wolin portrays a country where citizens are politically uninterested and submissive--and where elites are eager to keep them that way. At best the nation has become a "managed democracy" where the public is shepherded, not sovereign. At worst it is a place where corporate power no longer answers to state controls. Wolin makes clear that today's America is in no way morally or politically comparable to totalitarian states like Nazi Germany, yet he warns that unchecked economic power risks verging on total power and has its own unnerving pathologies. Wolin examines the myths and mythmaking that justify today's politics, the quest for an ever-expanding economy, and the perverse attractions of an endless war on terror. He argues passionately that democracy's best hope lies in citizens themselves learning anew to exercise power at the local level. Democracy Incorporated is one of the most worrying diagnoses of America's political ills to emerge in decades. It is sure to be a lightning rod for political debate for years to come. In a new preface, Wolin describes how the Obama administration, despite promises of change, has left the underlying dynamics of managed democracy intact."
A Bill Moyers interview with Sheldon Wolin.
Sheldon Wolin: Fascism by Design
(Sheldon Wolin - YouTube short video)
* * * * *
Sheldon Wolin on Corporate Influence on Democracy
(Bill Moyers interviews Sheldon Wolin - YouTube long video)
__________________________

Paul Krugman unwittingly pulls the mask off modern fascistic imperialism.
NYT's Krugman Pilloried on 9/11 Anniversary for Claiming No 'Mass Outbreak of Anti-Muslim Sentiment' in US After 2001 Attacks
Anti-Muslim hate crimes soared after 9/11, and thousands of Muslims in the U.S. were detained—and some tortured—in George W. Bush's futile anti-terror dragnet.
(Brett Wilkins, staff writer, Common Dreams.org)
"New York Times columnist Paul Krugman faced withering criticism Friday after he claimed that there was no "mass outbreak of anti-Muslim sentiment and violence" following the September 11, 2001 terrorist attacks on the United States.

"Overall, Americans took 9/11 pretty calmly," Krugman tweeted on the 19th anniversary of the attacks that left nearly 3,000 people dead in New York, Washington, D.C., and Pennsylvania, and led to U.S. wars of choice in Afghanistan, Iraq and elsewhere in which at least hundreds of thousands—and perhaps as many as 2 million—people have died in predominantly Muslim countries."

* * * * *
Cost of war: 37 million displaced by the U.S. "War on Terror" since 9/11
David Vine - author
"The United States of War"
on Democracy Now!
September 11, 2020
(YouTube)
"American University professor David Vine is the co-author of a new report that found at least 37 million people in eight countries have been forced to flee their homes since the start of the U.S.-led, so-called Global War on Terrorism in 2001. "I think most people in the United States, myself included, have not really reckoned with the total damage that these wars have caused," says Vine. The U.S. currently has 800 military bases around the world, "more bases than any nation in world history," he notes. "These bases have not only enabled war, not only made war possible, but they've actually made war more likely — made war a far too-easy-policy choice."
__________________________
It's a myth that following 9/11 everyone supported a war waged against a vaguely defined noun.
I know I didn't and I remember I wasn't alone.
Protests against the Iraq War
(hyperleap.com)
We shouldn't be fighting people.
We should be fighting against poverty and pollution.
We should fight to ameliorate the effects of climate change.
We should be fighting for a future.
Posted by Talking Bag at 8:20 AM