Today I was running a few errands. I usually listen to music, but I decided to tune into NPR. It was a mistake. If you take the time to educate yourself on the issues, you should be disgusted by what passes for a national public radio broadcast. It's almost completely crap, what isn't crap, isn't moving the conversion forward, it's barely of human interest.

The public owns the airways, but we gave it away to our corporate overlords. We gorge on their bullshit and go willingly to oblivion.

But at least we have Chris Hedges:

"In a conversation about his new book ‘America: The Farewell Tour,’ Chris Hedges tells journalist, Hugh Hamilton, that institutions and practices rooted in a capitalist economic system in the US are unraveling, while also making a call for action. Two-part interview."

"In a conversation about his new book, ‘America: The Farewell Tour,’ Chris Hedges tells journalist Hugh Hamilton about the political goals of the Christian Right and the prison-industrial complex, in the second part of a two-part interview." 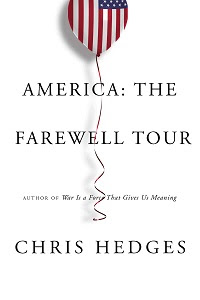 "America, says Pulitzer Prize­–winning reporter Chris Hedges, is convulsed by an array of pathologies that have arisen out of profound hopelessness, a bitter despair, and a civil society that has ceased to function. The opioid crisis; the retreat into gambling to cope with economic distress; the pornification of culture; the rise of magical thinking; the celebration of sadism, hate, and plagues of suicides are the physical manifestations of a society that is being ravaged by corporate pillage and a failed democracy. As our society unravels, we also face global upheaval caused by catastrophic climate change. All these ills presage a frightening reconfiguration of the nation and the planet.

Donald Trump rode this disenchantment to power. In his “forceful and direct” (Publishers Weekly) America: The Farewell Tour, Hedges argues that neither political party, now captured by corporate power, addresses the systemic problem. Until our corporate coup d’état is reversed these diseases will grow and ravage the country. “With a trademark blend of…sharply observed detail, Hedges writes a requiem for the American dream” (Kirkus Reviews) and seeks to jolt us out of our complacency while there is still time."