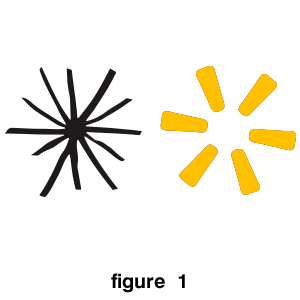 In 1973 Kurt Vonnegut drew us a picture of an asshole in his book Breakfast of Champions. The Walton family, owners of Walmart, have updated the asshole for the twenty first century! (see fig. 1)

But hey, don't waste your time wondering what I think:

Hiding in Plain Sight: Why We Cannot See the System Destroying Us
(Jonathan Cook at Counter Punch.org)

"And yet, base your political thinking on what should be truisms, articulate a worldview that distrusts those with the most power because they are the most capable of – and committed to – misusing it, and you will be derided. You will be called a conspiracy theorist, dismissed as deluded. You will be accused of wearing a tinfoil hat, of sour grapes, of being anti-American, a social warrior, paranoid, an Israel-hater or anti-semitic, pro-Putin, pro-Assad, a Marxist.

None of this should surprise us either. Because power – not just the people in the system, but the system itself – will use whatever tools it has to protect itself. It is easier to deride critics as unhinged, especially when you control the media, the politicians and the education system, than it is to provide a counter-argument."