Water, water, everywhere,
Nor any drop to drink.
Ian McKellen reads "The Rime of the Ancient Mariner" by Samuel Taylor Coleridge
(YouTube.com)

I normally avoid horror books, but I’m halfway through Troubled Water: What's Wrong with What We Drink by Seth M. Siegel, and I’m trying not to shit my pants.

It’s estimated that 0.00775 of all the water on Earth is available for drinking. Of the available water, how much is healthy or even safe to drink?

Consider that throughout human history natural pathogens have thrived in our water due to the unprecedented quantities of sewage, both human and animal, we dump into it. This has been mitigated by water treatment plants that add chemicals to our water to kill micro-organisms, chemicals that can also be dangerous to all animals, and may interact with other compounds found in our water in ways we may never know. In addition we’ve been adding industrial and household wastes in staggering amounts. Farming, especially factory farming, has been polluting surface water and vast portions of our water tables with pesticides, antibiotics, hormones, etc. etc. etc.

Landfills are a concentrated source of contamination. Homes and medical facilities flush massive quantities of drugs, cleaning chemicals, and other hazardous wastes down the drain every second of every day.

Every time you take a shower, wash your clothes, do the dishes, or eliminate the drugs your body hasn't absorbed, you add to the growing chemical soup we all drink, whether your water comes from a well, a municipal service, or a bottle. And don't forget everything you eat was raised, grown, or washed in questionable water, or contains colors, preservatives, binders, or bullshit made of God knows what.

Everyone cringes when they consider spacemen subsisting on their recycled effluent during prolonged service in space. The Earth is just a huge spaceship, and we've been drinking our own urine for a long time.

The human race might be able to find a cure for its fossil fuel addiction, but giving up potable water seems beyond our skill set. I’m old enough to remember when the notion of buying a drink of water was ridiculous. Now I wonder when the water wars will sweep across the globe.
______________________________

What Percentage of the Earth's Water Is Drinkable?
In its current state, less than 1% of the Earth's water is usable.
(John Misachi at WorldAtlas.com)

Here’s Where the Post-Apocalyptic Water Wars Will Be Fought
(George Dvorsky at Gizmodo.com)

"Published today in Global Environmental Change, the paper identifies several hotspots around the globe where “hydro-political issues,” in the parlance of the researchers, are likely to give rise to geopolitical tensions, and possibly even conflict. The authors of the new report, a team from the European Commission’s Joint Research Centre (JRC), say the escalating effects of climate change, in conjunction with ongoing trends in population growth, could trigger regional instability and social unrest in regions where freshwater is scarce, and where bordering nations have to manage and share this increasingly scarce commodity."

“The action creates instant doubts about the legal status of myriad seasonal or isolated wetlands and thousands of miles of waterways, including vast swaths of the arid West. And it clears the way for the Environmental Protection Agency to finish a follow-up regulation in the coming months that could leave most of the nation's wetlands without any federal safeguards.”

Troubled Water: What's Wrong with What We Drink
(GoodReads.com) 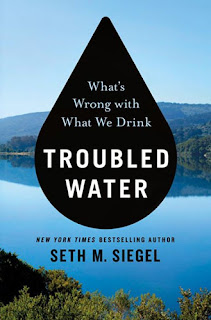 What’s Wrong With What We Drink?
(Ralph Nader Radio Hour)

“Contaminated water in America is not confined to Flint, Michigan. Ralph welcomes Seth M. Siegel, author of “Troubled Water: What’s Wrong With What We Drink,” who not only outlines the problem with our most precious resource but tells us what we can do to fix it.”

Trump Administration Nixes Protection For 63% Of US Waterways
(Ron Placone on YouTube.com)