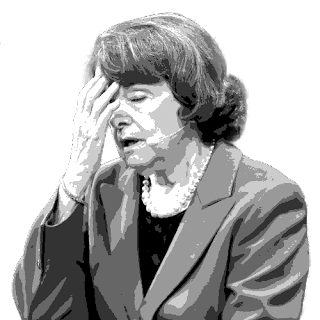 Dianne Feinstein Is a Bigger Climate Threat Than Trump
Only a bold plan like the Green New Deal can slow global warming, and that won't happen if powerful Democrats keep calling for moderation.
(New Republic.com)
"As Trump denies, though, Democrats delay."

The Hard Lessons of Dianne Feinstein’s Encounter with the Young Green New Deal Activists
(Bill McKibben at The New Yorker.com)

"One imagines that Senator Dianne Feinstein would like a do-over of her colloquy with some young people on Friday afternoon. A group of school students, at least one as young as seven, went to the senator’s San Francisco office to ask her to support the Green New Deal climate legislation. In a video posted online by the Sunrise Movement, she tells them that the resolution isn’t a good one, because it can’t be paid for, and the Republicans in the Senate won’t support it. She adds that she is at work on her own resolution, which she thinks could pass. Then, when the group persists in supporting the Green New Deal, which was introduced by Representative Alexandria Ocasio-Cortez, Feinstein responds, “You know what’s interesting about this group? I’ve been doing this for thirty years. I know what I’m doing. You come in here and you say, ‘It has to be my way or the highway.’ I don’t respond to that. I’ve gotten elected, I just ran, I was elected by almost a million-vote plurality,” she continued. “And I know what I’m doing. So, you know, maybe people should listen a little bit.”

Well, maybe. But Feinstein was, in fact, demonstrating why climate change exemplifies an issue on which older people should listen to the young. Because—to put it bluntly—older generations will be dead before the worst of it hits. The kids whom Feinstein was talking to are going to be dealing with climate chaos for the rest of their lives, as any Californian who has lived through the past few years of drought, flood, and fire must recognize."

“Feinstein told me she was surprised she went viral, because: ‘You know what somebody said to me?–I didn’t see any of this–they said anybody with a cell phone in their hand can get you on international news in two minutes. I never knew that,” Grim tweeted, adding, “She was chair of the Intelligence Committee, and had just come from a hearing.”

The Viral Confrontation With Dianne Feinstein Had a Political Impact Most Pundits Missed
(The Intercept.com)

"As the protests persist, the lawmakers should be prepared for more of those interactions to go viral, unlike Feinstein, who was caught by surprise. “You know what somebody said to me? — I didn’t see any of this — they said anybody with a cell phone in their hand can get you on international news in two minutes,” Feinstein told an Intercept reporter, tapping her finger on his phone. “I never knew that.”