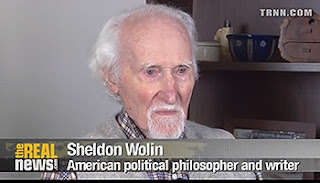 Chris Hedges and Sheldon Wolin discuss history and politics and the forces that shaped our nation. This eight-part interview is well worth watching, it is both entertaining and enlightening.

CHRIS HEDGES, PULITZER PRIZE-WINNING JOURNALIST: Hi. I'm Chris Hedges. And we are here in Salem, Oregon, interviewing Dr. Sheldon Wolin, who taught politics for many years at Berkeley and, later, Princeton. He is the author of several seminal works on political philosophy, including Politics and Vision and Democracy Inc.. And we are going to be asking him today about the state of American democracy, political participation, and what he calls inverted totalitarianism. So let's begin with this concept of inverted totalitarianism, which has antecedents. And in your great work Politics and Vision, you reach back all the way to the Greeks, up through the present age, to talk about the evolution of political philosophy. What do you mean by it?


SHELDON WOLIN, PROF. POLITICS EMERITUS, PRINCETON: Well, I mean by it that in the inverted idea, it's the idea that democracy has been, in effect, turned upside down. It's supposed to be a government by the people and for the people and all the rest of the sort of rhetoric we're used to, but it's become now so patently an organized form of government dominated by groups which are only vaguely, if at all, responsible or even responsive to popular needs and popular demands. But at the same time, it retains a kind of pattern of democracy, because we still have elections, they're still relatively free in any conventional sense. We have a relatively free media. But what's missing from it is a kind of crucial continuous opposition which has a coherent position, and is not just saying, no, no, no but has got an alternative, and above all has got an ongoing critique of what's wrong and what needs to be remedied.

The entire three hour interview is available on Youtube.
Posted by Talking Bag at 5:02 AM