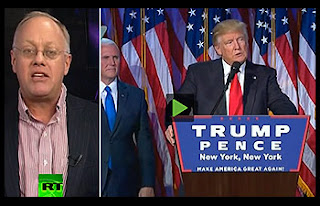 ONE NATION UNDER TRUMP

Chris Hedges and Michael Smith clearly express issues of concern and succinctly sum up the cluster fuck that defines us, the U.S., and our doomed planet.

I noticed they blame Liberals for Trump, a trend among many critics, omninously some of the most brilliant. Why is there a trend to blame Liberals for the failures of Conservative ideology? Perhaps this blame is not what it seems. A definition that accurately describes Left and Right, Liberal and Conservative, across a spectrum of beliefs, biases, knowledge, and intelligence seems to me an impossibility.

Is the failure of what passes for a Modern Liberal Left, a very shallow and dim reflection of the genuine and rigorous Left of the past, fairly called a Liberal failure? Watered down Liberals litter the airwaves, blithering on the boob tube as much as can be allowed or tolerated by the media moguls. These do not represent the architects of change that fought the factories during the Industrial Revolution, that went on strike when the Robber Barons treated them like slaves, winning rights for workers after many were shot down like mad dogs. Professional Liberals on air or in office today suck up to the Robber Barons and get sweet treats for being lap dogs.

The genuine Left became increasingly marginalized over time, and continues to struggle for an identity, using labels like Progressive and Socialist. These labels sadly generate more libel than solidarity. Genuine Liberals can be found on the fringes, in books, on some rare independent media sites, KPFA radio, talking amongst themselves or yes, yelling in the street. Genuine Liberals can be found in movements like Occupy, Black Lives Matter, or the valiant Standing Rock protesters. But when Liberals become troublesome they are crushed by our increasingly oppressive and militarized surveillance state, the Big Brother bought by billionaires and implemented by both Democrats and Republicans. Right Malcolm?

Leading Democrats do not represent the traditional Left, they are not Liberal based on historic standards. They will at times co-opt icons of the Left, invoking actors of substance like Martin Luther King, Jr., only to turn them into toothless brand names. The new Left is Right. Similarly Republicans have morphed into Frankenstein's Monster, a creation of extreme conservatism that is running amok. It's hard for me to blame Liberals for not preventing Trump, but it is easy to see that Democrats played a significant role in getting him elected by reneging on their social contract. Trump appealed to some folks who used to vote Democrat, as well as those who have always bought into conservative rhetoric. No doubt many Trump supporters think Reagan was great, not a Hollywood actor unfit to lead, an empty smiley-face playing frontman to despotic sociopaths.

Imperial expansion, big business, and class suppression are as American as apple pie. But Reagan took it up a notch, he helped usher in a new era of class warfare, and Trump was a beneficiary. When Democrats turned their backs on the poor and middle classes, and fought for war instead of peace, they lost not only their supposed credibility, but the basis for the support of their base.

Reagan's fabricated image has reached mythic proportions, he is basically Trump's political grandfather. Generations of voters denied perspective by a pervasive and persuasive propaganda machine are angry and confused because the fantasy they were sold is falling apart. In a bizarre metaphoric twist Trump is propaganda's fallout, his reign will be The Bomb.

When asked about my immediate reaction to Trump's election, I honestly respond that I felt the least impact of all the elections in my lifetime. I didn't react in horror, because it seemed so plausible, almost inevitable. I was ready. I felt worse when Reagan and W were elected, because it seemed so crazy to me. I have come to a better understanding of our dysfunctional and corrupt political system. This is what our media-driven fog of shit has caused. The electorate is an angry mob who keeps lynching themselves instead of the real assholes. Trump is another jolt in a train wreck that has been happening for decades. Our nation under Trump is another day on the Doomsday Express, but his creepy clown car is filled with too many monsters, the wreck may be close to an end. The End.

The calm I felt following Trump's election is most certainly becoming a profound and disheartening dread.
Posted by Talking Bag at 5:55 AM