Vulture Capitalists are perched and ready to feed on Puerto Rican's.

A bill is working its way through Congress that would put a Republican-controlled board of non-residents in charge of the Puerto Rican economy. To help them out of a crisis, just like those helpful emergency planners in Flint, MI. I wonder if any of this bill's supporters have ever heard of crony capitalism? My prediction: things will get worse, except for a few very rich individuals.

Some folks lament that the U.S. Government isn't run like a business. But it's a YUGE business, owned by the Banks and some of their friends. The most powerful players not only enrich themselves on tax dollars, they let tax dollars clean up their messes, like gambling debts and oil spills.

The monied class hates when democracy stands in the way of opportunity.

Here's a quick summary of the Puerto Rican crisis from Last Week Tonight with John Oliver: 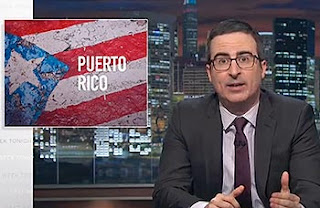 Here's some information about human vultures feeding in Argentina and Greece:

Greece’s ruin began with secret, fraudulent currency swaps, designed a decade ago by Goldman Sachs, to conceal Greek deficits that exceeded the euro zone’s 3%-of-GDP limit.  In 2009, when the truth came out, Greek debt holders realized they had been cheated.  These debt buyers then demanded usurious levels of interest (or, if you prefer, a high “spread”) to insure themselves against future fraud.  The compounding of this interest premium brought the Greek nation to its knees.  In other words, the crimes committed to join and stay in the euro, not Greek profligacy, caused the crisis.

The USA, Brazil and China escaped from depression by increasing their money supply and government spending and taking control of currency exchange rates—crucial tools Greece gave up in return for the euro.

Worse, once the Trojan hearse of the euro entered Athens, tourism, Greece’s main industry, drained to Turkey where hotels and souvenirs are priced in cheap lira.  This allowed Dr. Mundell’s remorseless wage-lowering machine, the euro, to do its work, to force Greece to strip all its workers of pensions and power.

Greece fell to its knees, with no choice but to beg Germany for mercy."

And speaking of Goldman Sachs, what's up with gold woman Hillary Clinton?

Hillary Clinton Won’t Say How Much Goldman Sachs CEO Invested With Her Son-in-Law
(TheIntercept.com)
Posted by Talking Bag at 8:57 AM